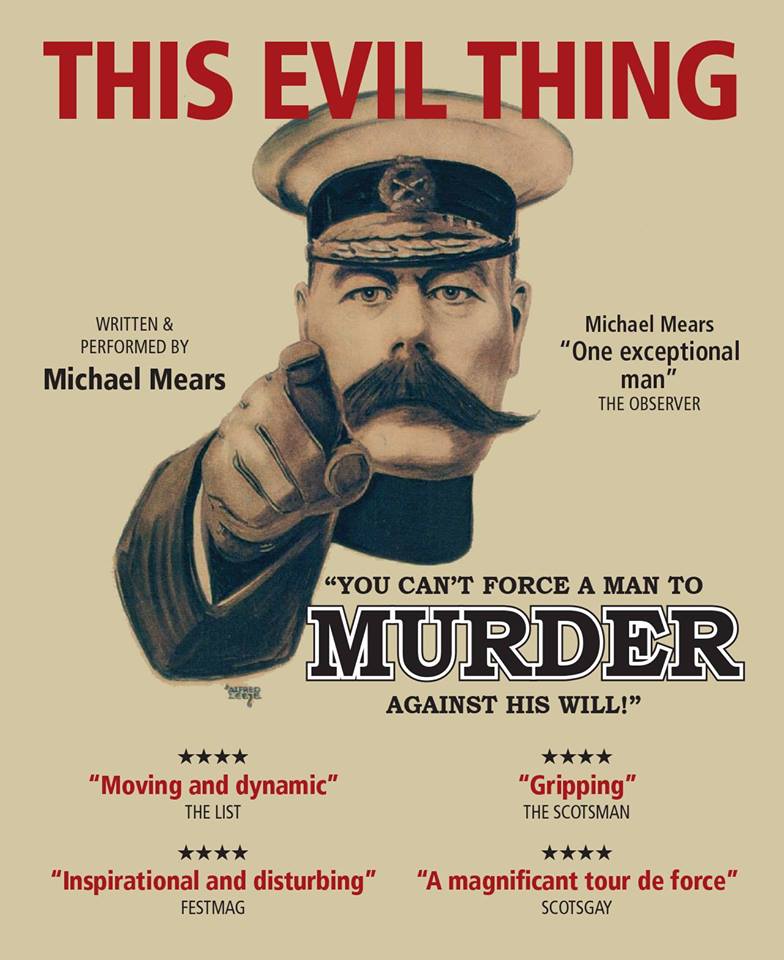 On Saturday, March 24, the 15th St. Meeting of the Religious Society of Friends (Quakers) will host a presentation of This Evil Thing, a one-man drama written and performed by award-winning author/actor Michael Mears. All are welcome at this free performance, which starts at 7:00 PM, at the 15th St. Meetinghouse, 15 Rutherford Place, Manhattan (between 15th and 16th Streets and between 2nd and 3rd Avenues). The performance will be followed by a panel discussion with Mears, Bill Galvin (from the Center on Conscience and War}, and Dan Seeger, the conscientious objector whose case rose to the Supreme Court.

Mears describes himself as someone who has inherited a “pacifist gene.” He says that his play “explores the courage it took to be a pacifist in the First World War, one hundred years ago – following two men in particular : Bert Brocklesby, a young schoolteacher, and preacher at his local Methodist church; and Bertrand Russell – one of the greatest philosophers of his time. With the advent of military conscription in 1916, their worlds are turned upside down. With military conscription still in force in many countries today, and prisoners of conscience still languishing in jails, the questions posed by This Evil Thing are as relevant and urgent as they were one hundred years ago.”

The play had its world premiere at the 2016 Edinburgh Fringe Festival, where Mears received a Fringe-First Award. Newspapers gave it four-star reviews with comments like “A moving and dynamic retelling of a hidden story” (The List) and “An inspirational and disturbing work”- (Festmag).

Dan Seeger, who is one of the panelists, is the conscientious objector whose 1965 case before the Supreme Court expanded the number of American citizens qualified for classification as conscientious objectors to military service. It did this by striking down the requirement that a conscientious objector must derive his conscientious claim from a belief in a Supreme Being. He has noted, “The decision in my case allowed only others also opposed to all wars in any form to qualify for alternative service, but this benefit did not extend to people who would fight in some wars but not others. There are enough instances in United States history, from the invasion of Mexico to the War in Iraq, which do not pass any reasonable “just war” test, that there seems no logic to the idea that in a free country one must fight in every war just because one might regard a particular war as unavoidable.”