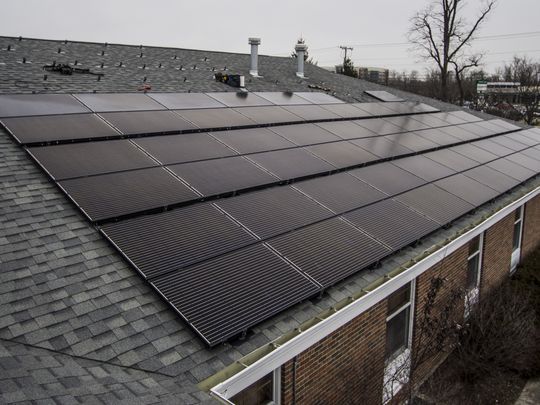 RICHMOND, Ind. – A Quaker church has hopes its efforts to harness solar energy to power its building will inspire other not-for-profits, individuals and businesses in the area to follow suit.

The installation of about 130 solar panels on the roof of First Friends Meeting, 2010 Chester Blvd., is more than halfway complete, with plans for the work to be finished in the coming weeks. First Friends is among a small handful of local organizations to independently utilize renewable energy to power their facilities.

Lincoln Blake, who is a co-clerk for the church and overseeing the project, said he is hopeful the panels will help the congregation lower its electricity bill by more than $2,000 per year, while also highlighting what is widely considered to be an important part of the Quaker faith: stewardship of the environment.

“This grows out of the Quaker concern for stewardship of the Earth,” he said. “We consider (Earth) to be a great gift and something we should take care of. This is just one small way we can do that more effectively.”

Blake said he considers taking care of the environment to be a non-political issue, and something for which everyone should have a greater concern.

“The general consensus is that care of the Earth is a Quaker belief,” he said. “Acknowledging there’s a wide array of views on an issue like this … we feel if we can do something to help preserve the Earth, I think our congregation is going to take any measure it can to do that.”

Blake said First Friends initially considered solar energy several years ago, but could not justify spending hundreds of thousands on the installation of panels that would produce a limited amount of energy.

“About 10 years ago, we had an initial interest in solar energy, but at that point it proved far too expensive,” he said. “So we laid it down, … The cost has significantly dropped since then, so it became affordable — feasible. 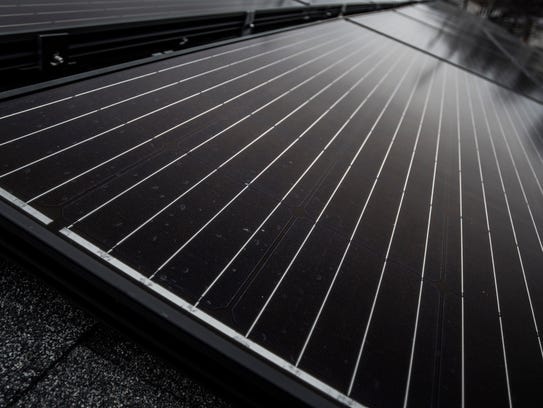 He said First Friends is paying about $70,000 to have these panels installed, and they’re expected to last for about 30 years. This includes about $28,000 from congregation members, another $30,000 from the Quigg Foundation and the rest from the not-for-profit’s own First Friends Foundation.

Installation of the panels was expected to be completed by the end of December, but poor weather prevented that from happening. The panes are being installed by Rectify Solar out of Indianapolis.

The building, which First Friends moved into in the late 1990s, is owned by Friends Fellowship Community Inc., the Quaker neighborhood that sits along the west side of Chester Boulevard south of Reid Health. First Friends Meeting has a 100-year lease on the building, for which they pay about $1 per year.

Blake said the project should be finished by the end of February, at the latest. The panes are arranged along the south-facing slant of the roof.

He said the use of the panels also won’t remove First Friends entirely from the grid; he said they will instead act as a supplement to the service the church receives from Richmond Power & Light.

He said he is hopeful the year-over-year savings — up to $2,000 on a yearly bill that averages about $4,000 — will initially allow the group to put money back into the foundation. Beyond that, Blake said he isn’t certain what will be done with the savings, or if they’ll simply go into the church’s general fund.

“We’ll be saving money, certainly, but what we will do with that hasn’t been determined yet,” he said. “Our biggest goal with this project is that we’ll inspire others to follow our lead, even if its on the individual level.”

He said the expected savings are expected to come through for the church, which last year had an annual budget of under $100,000, in the next seven to nine years.

“It takes a little bit of time, but we are confident we’ll be able to save money in the long run,” he said. “It’s an important step for us and something our congregation fully supported.” 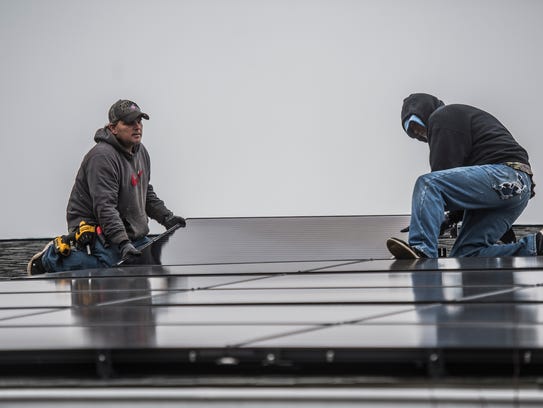 Blake said he sees a good opportunity for local businesses and others to look into installing solar panels on their own buildings, even if it’s just a few. He said local utility companies offer net-metering as an incentive for those who do install panels.

Net-metering allows customers with solar panels and other renewable energies to connect to the power grids of public utilities, giving them a way to transfer surplus power onto the grid; this gives the customers an opportunity to offset the costs of power used from the grid.

The state of Indiana last year passed a law limiting the amount of energy that can be matched through net-metering, SB 309, though Blake said the rule only applies to investor-owned companies, which Richmond Power & Light is not.

While RP&L does offer net-metering to its customers, nobody who receives power through the utility has yet requested the service, general manager Randy Baker said.

He said he sees the efforts by First Friends as being a good first step for those in the area interested in pursuing renewable energy sources, but also said it may in the long run have an impact

“We do our own net-metering for anything below 10 kilowatts,” Baker said. “We don’t have anyone using the service right now.”

First Friends itself far exceeds the 10 kilowatt limit, as the church’s new panels have a capacity of up to 30 kilowatts.

“This is a really good incentive for people who want to embrace environmentally-friendly means of energy production,” Blake said.

Because the group’s capacity exceeds what can be matched by RP&L, First Friends must use a net-metering service provided by the Indiana Municipal Power Agency, which offers a match of 32 cents for every watt sold to them.

Blake said while the savings are limited for larger groups, such as the church, he is hopeful people will still consider investing in forms of alternative energy. 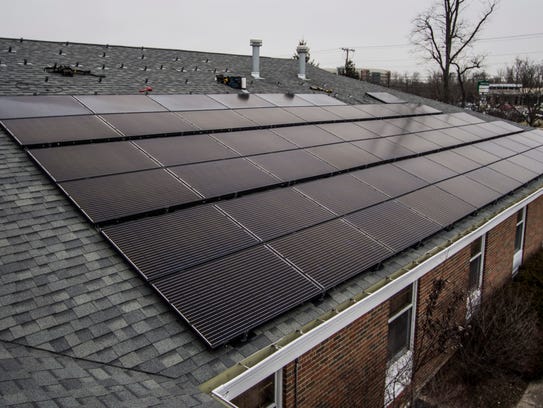 “It strikes me as remarkable that nobody else in Richmond has done this yet,” he said. “Our hope is to try and promote the use of solar energy moving forward. We really think it’s an effective way of saving money and preserving the environment more effectively.”

First Friends revisited the idea of installing panels after seeing them in use by a Quaker church in Winchester, which had been using solar energy for a short period.

As far as renewable energy in Richmond goes, the concept is nothing new, though it’s had limited applications in recent history. There is a solar park located near the RP&L headquarters along U.S. 27 South that is owned by IMPA. The park, introduced in 2014, contains about 4,000 solar panels.

IMPA is also considering adding a second solar park, this one at the former New Creations site by Interstate 70. The 44 acres of land would have up to 28,000 panels, which would be able to power up to 1,000 homes. That project is expected to be completed later this year or in early 2019.

The city of Richmond also has a large, standalone solar panel on the southeastern side of its building.

There are, however, a limited number of organizations and individuals who have invested in solar energy in any capacity. Among them are Cope Environmental Center and the owner of a home on the far east side of town. Both structures are technically located outside of Richmond city limits, Blake said.

Baker said he thinks the church’s efforts to adopt solar energy may begin a new trend in the area when it comes to renewables, but the full effects of the group’s efforts remain to be seen.

It’s also unclear what impact the recent announcement by the Trump administration, which will impose 30 percent tariffs on imported solar panels, may have on the future of renewable energy usage in the United States, including Wayne County.

The tariff was imposed in part as an effort to encourage overseas producers of the cells to move manufacturing operations to the United States, though an industry trade group, Solar Energy Industries Association, said the move could cost up to 23,000 American jobs. The figure has so far not been independently verified.

The tariff, according to a U.S. Trade Representative fact sheet, will decline by five percent each year during a four-year period, from 30 percent down to 15 percent.

Baker did not speak on what he thinks the impact of the tariff may be, but said he believes the future of energy generation and consumption may come from renewable sources.

“I think that distributed energy, whether by solar or wind, is going to be a thing in the future,” Baker said. “I actually thought 15 years ago, we’d have more of it than we do now. But I still think it’s moving in that direction.”